Time for a sit down on Littlehampton sea front

That was more like it!
If only all the other days in August had been like this one! We have enjoyed fresh air and sunshine.
We were at the Ford car boot sale at about quarter to eight.
There were so many people there today.
We have found some interesting things to sell and admired other things that we couldn't afford to take on board as stock.
The trolley was well loaded as we went back to the car.
Then we went to Littlehampton for breakfast - back to The Balaton today.
Littlehampton was buzzing - a seaside resort, on a sunny Bank Holiday weekend.
It is a destination very often for church or community groups from south London - mostly Afro Carribean and full of colour and life.
We enjoyed watching them at play and taking a few candid photographs - beautiful young women and bright clothing mainly!
But our aim today was to share with you the Littlehampton bench.
It was officially opened this week and is 324 metres long - though not every part can be sat upon.
It is hoped to extend the bench in the future so that Littlehampton would have the longest bench in the world. 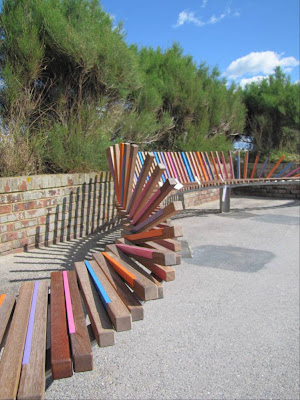 At the moment the bench snakes along the sea front between two shelters, where one could sit out of the rain.
It weaves behind litter bins and round lamp posts.
It is possible to have wooden slats engraved with one's name - at a price.

In the shelters the bench circles and loops making it fun to look at and to play on. 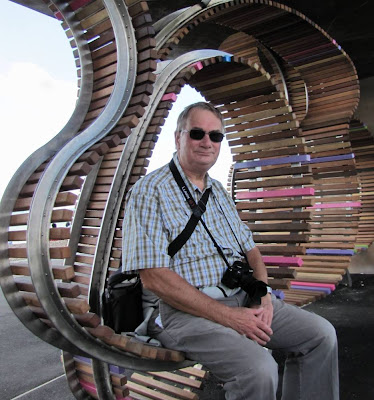 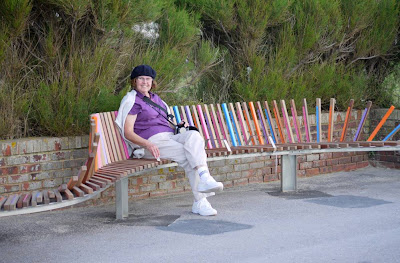 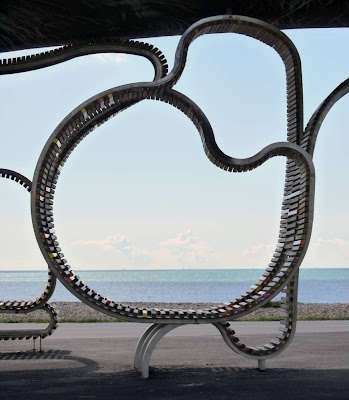 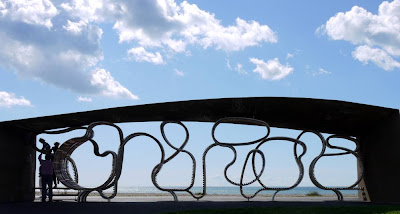 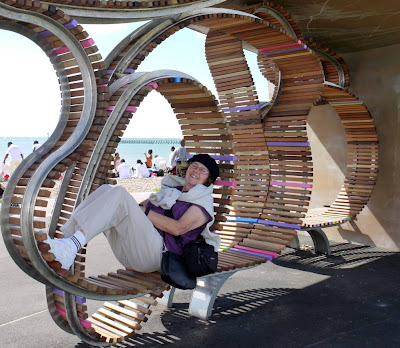 These last two pictures are from a web site. 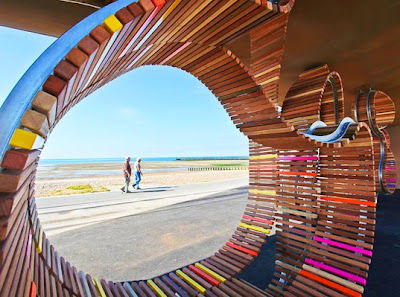 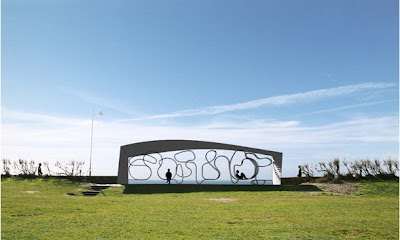 It was well gone 2 o'clock when we got home. We made a cup of tea and slumped down in front of the TV, entranced by Oklahoma - the musical.
I saw that at the cinema with my Mum when I was about 12 or 13 - presumably very unaware of the dark overtones.
I sat and wrote up my purchases.
So, a lovely day. Tomorrow we will stay closer to home. We will go to the Pease Pottage boot sale and be back in time to go and see the very newest great niece - Lottie who is up from Plymouth.

Time for a sit down on Littlehampton sea front
posted by Grandma P on Saturday, August 28, 2010